There’s a regional technique out there — in the South mostly — that’s been around for a while. It’s called speed worming, and it’s super effective. Basically it’s about speed, splash and a little noise with some subtlety.

I can’t think of any reason why it won’t work everywhere. So, here goes…

Start with a paddle tail worm with a somewhat thick body. The Berkley Havoc Subwoofer is exactly that. I designed it for speed so it’ll run true no matter what, and the pre-cut tail will really kick up a fuss.

Even better, it does all of this in a subtle manner. It’s the perfect bait for speed worming.

I fish it three ways:

This one is easy enough. I Texas rig it weightless with a 3/0 or 4/0 VMC EWG worm hook

and throw it on braid. I then run it right on the surface. It ends up looking like a small, somewhat quiet buzzbait except that you can fish it slower and the fish will hold on to it longer because it’s soft and tasty.

This is a very subtle approach but one that’ll really get their interest going when the bite is tough. I rig it Texas-style with a very small weight. Sometimes a weighted swimbait hook will work even better than a worm weight. Try both. Go with what works best for you.

Bring it back right under the surface on braid or fluorocarbon. Usually the bass will strike it hard and fast but if they don’t, or if they miss it, just kill the bait. Let it freefall. They’ll turn around and nail it 90 percent of the time.

Speed worming with a swim jig

This is a very subtle presentation but one they probably haven’t seen. I cut the nose off my Subwoofer at the gill so that it fits tight up against my jig head. After that swim your jig just like you normally would.

The worm gives the jig a tail that waves back and forth like nothing before. I’m telling 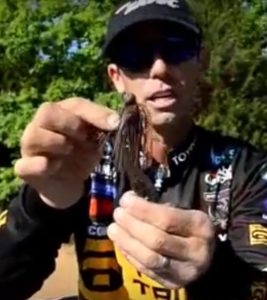 you, this is a dynamite technique whenever you’re fishing a swim jig and you want more action but at the same time you want to keep it subtle and quiet.

Get yourself a pack or two of Berkley Havoc Subwoofer worms and give these techniques a try. You’ll be surprised at how effective they are when things get tough.