Recently I received a really good report from a friend who’s a serious recreational angler about one of my rods — the 6 foot, 4 inch, medium power, moderate action Ike Delay Series made by Abu Garcia. I thought I’d share some of his experiences with you and give you my perspective on why they should be in your rod box.

He fished jerkbaits for smallmouth with it. Here’s a mix of what he had to say and what I have to say.

First, let’s talk about the length and the handle. At 6 foot, 4 inches it’s short enough to be used comfortably by anglers who aren’t 6 foot tall or better. That’s a big deal because as you create a cadence with that shorter length you don’t slap the water with the tip and you aren’t dealing with a piece of equipment that’s heavy and unwieldy.

Another thing — I learned this many years ago from Larry Nixon — is that the shorter length slows you down. You don’t move the lure as far with a twitch as you would with a longer model. My friend is 5 feet, 8 inches tall so the shorter length suited him perfectly and, like most of us, he has a tendency to speed up his presentations at times. The shorter length helped him deal with that, too.

The last thing is this category is the short handle. This makes it easy to twitch with and the handle doesn’t slap against your forearm or get caught in your elbow. It also helps balance the rod in your hand. That might not make much difference during the first hour you’re fishing a jerkbait but it’ll make a huge difference at the end of the day. And, my friend also commented that it didn’t get all tangled up in his heavy clothing. (It was cold where he was fishing.)

The second thing I want to talk about is the delay action that the soft tip gives you on the hookset. This rod is part glass so it has a soft, parabolic bend to it and a springy tip. This allows the fish to take the bait completely in its mouth before you feel the bite or are able to react to it. At the same time, though, the spring in the tip drives the hook home, clean and with force every single time. 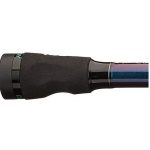 Don’t worry about the soft bend, though. The butt is plenty heavy enough to handle a big fish. My friend was especially impressed with this aspect of the rod because his bite was out, off the end of big laydowns. He had to move his fish away from the tangle of wood quickly or he would have lost them.

There’s also a 6 foot, 8 inch model that’s basically the same except for the length. It’ll meet the needs of taller anglers or those who want to make longer casts, or in unusual circumstances handle heavier lures. I like to call both of these rods twitch rods because they’re made specifically for baits that are retrieved with a twitch or a jerk. They’ll handle walking sticks, prop baits or any other lure as easily as they handle jerkbaits. Give one a try if you get the chance. You won’t be sorry.